The Portuguese literary giant of the twentieth century, Jose Saramago, wrote a delightful, surreal and fantastical novel in the 1980s called The Stone Raft. It tells the story of a strange occurrence in the Pyrenees along the Franco-Spanish border when a breach opens up in the ground and the whole Iberian Peninsula physically breaks away from the rest of Europe and floats off westward into the Atlantic on a collision course with the Azores and the Americas. Chaos ensues as the authorities, bureaucrats and ordinary people in Spain and Portugal try to come to terms with their new and changing reality. It is an exceptionally entertaining and well-written fantasy.

Brexit on the other hand, is not a fantasy, but rather an unfolding reality with the prospect of a no-deal outcome with just two and half months to go to the October 31st 2019 exit date having risen significantly with the replacement of Theresa May by Boris Johnson at the head of the British government. However, while the United Kingdom may leave the European Union, with or without a deal, unlike Iberia in Saramago’s fiction, Britain can never leave Europe geographically. It will always be there, right where it is now, with France to the south, Ireland to the west and the Low Counties and the North Sea to the east and north.

This fact matters greatly regardless of the outcome of the Brexit process. It matters because, despite globalisation, the internet and global capital flows, geography still matters a great deal when it comes to trade, in fact it matters more than almost anything else. Without exception, the world over, one of the key indicators of the likely volume of trade between any pair of countries is the physical distance between them. Indeed, over half of the UK’s current exports go to other European countries, and these European countries are also the source of over half of the UK’s imports. Just seven countries, Germany, Netherlands, France, Ireland, Belgium, Spain and Italy, all EU members, account for 40% of the UK’s trade. In contrast, the proportion of its trade that the UK conducts with much more distant countries such as Canada, India, China, Brazil and Australia are all small single-figure percentages. Even the UK’s trade with the US accounts for just 18% of its exports and 11% of its imports.

This pattern of trade with close geographical neighbours repeats itself all over the world. For example, the US does 40% of its trade with other countries in the Americas, with Canada and Mexico being its largest trading partners. Likewise, both France and Germany do approximately 60% of their trade with other European countries. Australia’s trade is concentrated predominantly in East and Southeast Asia while India does the greater part of its trade with East Asia and the Middle East. Consequently, the notion that the U.K., in a no-deal scenario, can pull down the shutters on its free trade with its closest geographic neighbours and overnight substitute that loss with new trade flows with far distant countries, while at the same time achieving greater levels of growth and prosperity, frankly, lacks all credibility.

A no-deal exit of the EU by the UK will not be a clean break nor will it represent a clean slate from which an entrepreneurial, buccaneering, free-trading, “Global Britain” will be able to launch itself upon the world to take advantage of opportunities that it cannot access from within the EU, but rather, it will be a return to the starting position of its negotiation with the European Union. Far from “getting on with it”, it will be just the start of a different, more difficult phase of the Brexit process. The inescapable fact is that because geography dictates trade volumes to a great extent, the UK will continue to find itself in the position of having to negotiate trade arrangements with the EU, with all of the current outstanding issues still unresolved – namely, the divorce bill for previously acquired obligations, the rights of EU and U.K. citizens living in each other’s territory, and of course, the border in Ireland. The difference will be that the U.K. will then find itself having to conduct these negotiations in rather more difficult circumstances than at present. Negotiating after a no-deal Brexit, the UK will be outside the Customs Union, outside the Single Market and will have lost access to all the free trade agreements with some 70 countries that it currently enjoys as a member of the EU and that it has taken the EU decades to put in place. 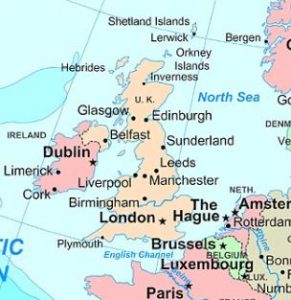 Therefore, while the U.K. may leave the EU, Britain can never leave Europe, and that fact, more than any other, means that sooner or later, deal or no-deal, Brexit or no Brexit, there will, in the end, be a negotiated trade deal between the UK and the EU and there will always be substantial trade flows between the UK and its closest neighbours. In this moment of uncertainty, that much we can be sure of, and that is something that we will be wise to consider with our eyes on the long game, as we formulate and implement the operating strategies for our businesses in the coming months and years.

More on the subject read, Ireland’s Gateway to and from the continent post-Brexit – Flanders